Zack is a professional thief who works with his older sister Ivy and Carmen Sandiego.

Zack and Ivy are originally from Boston, Massachusetts, a historic city in the US.

Zack's personality can be described as being goofy and having a looser behavior compared to the others, but he has displayed determination under circumstances when he is needed. Despite his tendencies, he can be level-headed in capers and is surprisingly good at acting, even if he sometimes doesn't know what he's talking about (The Duke of Vermeer Caper). His confidence can sometimes convince the people he's lying to, such as when he lied to Dash Haber about being a Duke and when he convinced El Topo that "the dingoes [were] going crazy".

Like his sister, he has a thick Boston accent. He can be trained to speak in proper diction when the need calls for it—especially when he needs to go undercover. The accent, however, will waver from time to time.

Zack has a large appetite and will eat any food, except for fish. He also hates it when people call Boston "Beantown".

Like everyone on Carmen's team, he uses his thieving skills for good. He also acts as a getaway driver for Carmen when she escapes her capers, being a highly skilled driver of both cars and boats (and once a helicopter). Zack is a big fan of action movies. When Carmen buys Zack a car from one of his favorite movies using money from V.I.L.E., Zack ponders whether the car is capable of the feats in the movie.

Zack has red hair, although lighter than his sister's. He has light cornflower blue eyes and freckles sprinkled across his face. Zack is shown to be decently tall. He wears a white and red baseball jersey, a black long-sleeve undershirt, dark blue jeans, and grey sneakers.

Zack often serves as a getaway driver for Team Red, able to drive almost any vehicle or at least learn how to drive one very quickly. He can operate anything from cars, trucks, boats, race cars like the Al Sabaq 9000, to helicopters.

Zack is a skilled actor and can replicate other accents relatively consistently. He has taken on various false identities, such as a duke, museum curator, science intern, and guard.

Before meeting Carmen, Ivy and her brother Zack were race car drivers. They borrowed money from a man named Sharkhead Eddie to build their car. Ivy built the car they used, and Zack drove it. They moved from amateur tracks to the professional league, where Zack met Trey Sterling, his rival. Trey taunted Zack about his car and Zack wrecked it in a reckless attempt to beat Trey. Zack and Ivy asked Eddie for more money to repair the car, but he refused, instead telling them to rob a store that was most likely used as a drop off point for the mob to pay him back.

It was at this store, Darryl's Donut Hole, that they first encountered Carmen, who had to keep them safe as V.I.L.E. used the donut shop as a front for printing money with stolen treasury plates. V.I.L.E.'s plan was to print money as a way of buying prime real estate in Boston to expand their influence and enterprises. Despite Carmen's efforts to keep them away, the siblings still aided her in finding and destroying V.I.L.E.'s money printings, making their own tea party. Realizing they have nothing in Boston, and to avoid Eddie, the siblings opted to join Carmen on her globe trotting capers.

The Duke of Vermeer Caper

The Opera in the Outback Caper

The Hot Rocks of Rio Caper

The Need for Speed Caper 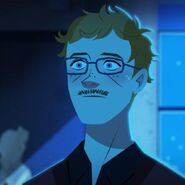 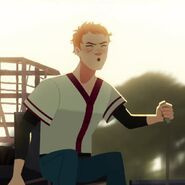 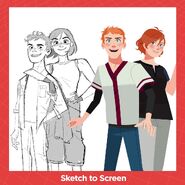