Carmen Sandiego Wiki
Register
Don't have an account?
Sign In
Advertisement
in: Computer games, Games, Where in the World is Carmen Sandiego?

Where in the World is Carmen Sandiego?

Carmen's Gang has committed another caper! And it's up to you to crack the case...

The player takes on the role of a rookie detective in the ACME Detective Agency. Carmen's V.I.L.E. underlings are stealing national monuments, artifacts, and other treasures, and it's up to the player to investigate areas, find clues, and ultimately get a warrant for the thief, track them down to their hideout, and arrest them. As the player successfully solves cases and captures crooks, they will receive promotions, which makes the challenge greater. If the player takes too long to catch up with the crook, or catches up with the crook without a warrant or with an incorrect warrant, the crook gets off scot-free.

After enough cases have been solved successfully, Carmen Sandiego herself will commit thefts. If the player successfully manages to apprehend her, she will be placed behind bars and the player's career will end as a master detective.

The original version of Where in the World is Carmen Sandiego? was ported to many different systems. Among them were the Amiga, Amstrad CPC, Apple II, Commodore 64, DOS, Macintosh, NES, SEGA Master System, SEGA Genesis, Super Nintendo, and TurboGrafix-CD. There were some minor differences between them, especially in graphics, but they played the same way. The console versions used a password system to allow the player to save their progress.

Where In the World is Carmen Sandiego? was a commercial blockbuster. As of late 1987, it was Broderbund's third best-seller for the Commodore 64. By 1995, over 4 million copies of the game had been sold. In 2020[1] and 2021,[2] it became a finalist for induction into the World Video Game Hall of Fame. 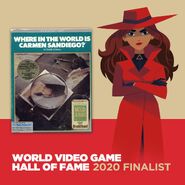 DefunctTV- The History of Where in the World is Carmen Sandiego?