Carmen Sandiego Wiki
Register
Don't have an account?
Sign In
Advertisement
in: Where in Time is Carmen Sandiego?, Television Shows, Game Shows

Where in Time is Carmen Sandiego? (TV Show)

"Where in Time is Carmen Sandiego?"
By The Engine Crew

Where in Time Is Carmen Sandiego? is an American short-lived half-hour children's television game show loosely based on the computer game of the same name created by Brøderbund Software. Just like its predecessor, the show was produced by WGBH Boston and WQED Pittsburgh, and ran from October 7, 1996, to December 12, 1997, with reruns airing until September 25, 1998. The show stars Lynne Thigpen as "The Chief", Kevin Shinick as ACME Time Pilot Squadron Leader and "The Engine Crew" as various informants. The show replaced Where in the World Is Carmen Sandiego?, and was recorded entirely at Kaufman Astoria Studios in Queens, New York City.

Every show begins with a cold open, the viewing audience sees Carmen Sandiego in her V.I.L.E. headquarters complaining to herself about something and quickly plots to steal the historical "seed" that led to its existence. In the first season, Carmen appears in a Fourth wall type of narration, in the second and final season, Carmen appears in a ship's nanoprobe. Carmen later summons to one of her V.I.L.E. henchmen and tells them what to steal and where to go. In the first season, she shines an Info-Beam on them to give them the details of the object in question. In the second and final season, she tells them to bring it back to her in a Loot Orb Cybersphere when they have it. The Chief appears and tells the audience that if the stolen object is not returned within 28 minutes, history will change forever. Then, the show begins with the Engine Crew preparing the ACME Chronoskimmer, a top-secret spaceship capable of time travel, for launch.

Three players ages 10–14, known as "Time Pilots" compete. The pilots are given 100 Power Points to begin the game. The Chief briefs the pilots what was stolen and when it was stolen from. Various skits are performed which give clues to the location where the villain went to, like the Cluefinder from World which is locked-in to someone from the past or the future. After the skit, three possible answers or locations are shown to the pilots. They simultaneously select their answers, then reveal them to Kevin. The viewer can see the individual choices represented by an individual color pink, green, and blue. They can see which choice the pilots made by the lights in front of them, before they actually reveal their answer. Any pilot with the correct answer scores 10 Power Points. Otherwise, their score remained the same.

At one point in the game, Carmen's henchman would provide a clue from the viewscreen. The points in time visited follow the historical progression of the "seed" that was originally stolen and it is repeatedly emphasized that all the history travelled through will be erased unless the artifact is returned. Therefore, the final point in time will always be the present or else very near the present. The typical course of the round is as follows:

There are also other ways to gain clues:

With Kevin on command, the two remaining pilots wave goodbye to the third-placed pilot, as he/she return to Time Net Command. The pilot warp to the present or near-present day, where they must activate the Loot Tractor Beam to bring back the stolen artifact away from the day's villain and place safely on board. The Chief lists eight events, and were related to the artifact that was stolen. The events appear on the board, and the pilot leading after the first round is given the option on who goes first. If there is a tie between the pilots, a coin toss decides who chooses the coin tosses are shown in the 2nd and final season. Whoever goes first must now list all the eight events in reverse chronological order. As long as the current pilot continues to list events in chronological order, they can continue playing. If the pilot picks an event that breaks chronological order or if they take too long, their turn ends, and their opponent must start again from the beginning. The first pilot to successfully list all eight events in reverse chronological order, recovers the artifact, wins the game, and advances to the Bonus Round to capture Carmen and the day's villain, while the runner-up is eliminated from the game and wins a CD player and Carmen Sandiego merchandise.

Final Round: The Trail Of Time

The pilot has 90 seconds to pass through all six gates by answering a history question on each gate posed by Carmen on The Trail Of Time, which goes from the past to the 20th century. The Engine Crew points the pilot to the next gate along the trail. All questions are related to the artifact that was stolen in that day's show, and are dual-choice. Following the crew's directions, the pilot runs to the first gate and presses a button to activate the question. If the pilot answers correctly, the gate will open automatically. Otherwise, the pilot must operate a device to manually open the gate, using up time. The pilot then runs to the next gate and the process is repeated. After the first two or three gates, the pilot captures the day's villain who stole the artifact from the beginning of the show. If the pilot can get through all six gates before time expires, he/she energize the Capture Crystal, which they take over and place in the Chronolock Chamber at the edge of the studio, to capture Carmen and win a computer system. If the pilot failed, Carmen escapes and the pilot win a set of encyclopedias and a portable music system with a collection of music.

Other than playing the Engine Crew, Owen Taylor, Jamie Gustis, Alaine Kashian, Paula Leggett Chase, and John Lathan, as well as James Greenburg (who was also one of the show's producers), also portrayed Carmen's V.I.L.E. henchmen:

The budget was smaller on this version of the show compared to World. As a result, the grand prize for a winning pilot captures Carmen was a computer system instead of a trip. Pilots on all levels received prize packs of varying sizes which consisted of one or more of the following: a baseball cap, T-shirt, a Where in Time Is Carmen Sandiego? board game, a Where in the U.S.A. Is Carmen Sandiego? board game, and a plastic watch.

The music on the show was performed by The Engine Crew. The music package included the theme song and the songs about clues in the engine room. The theme was played in the opening and closing sequences. When the contestant was heading for the trail of time, the theme was sometimes edited after the crew sang, "We're on the case" and the villains say, "And they're chasing us through history!" used in the first season only. In the second and final season, when the contestant headed for The Trail of Time, the ending was normal rather than the villains singing the end part. The show's main theme song was written by Sean Altman and David Yazbek, and is sung by the engine crew as the audience claps to the rhythm of the theme song in the first season. In the second and final season, the audience did not clap to the beat.

A French-Canadian version of the show, titled À la poursuite de Carmen Sandiego (In pursuit of Carmen Sandiego), was aired on Radio-Canada between 1998 and 1999, shortly after the original American version of the show ended. This version of the show stars Brigitte Paquette as "The Chief", Patrick Labbé as "ACME Time Pilot Squadron Leader", and Daniel Dô, Marie-Hélène Fortin, and Widemir Noumil as "The Engine Crew". Gameplay in this version stayed the same as the original, with each pilot going through all six gates and captures Carmen wins a grand prize package that included a mountain bike rather than a computer system. 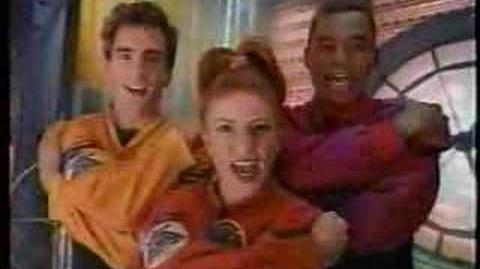 Where in Time is Carmen Sandiego? Opening

Where in the World Is Carmen Sandiego? The Reunion

Where in Time is Carmen Sandiego Season 2 Intro (High Quality)
Community content is available under CC-BY-SA unless otherwise noted.
Advertisement