Vera Cruz (real name Carlotta Valdez) is the mother of Carmen Sandiego and the love interest of Dexter Wolfe.

In Carmen Sandiego's imagination, Cruz appears as a tall woman with an orange trench coat, yellow scarf, and long brown hair with bangs covering the eyes. In addition, she wears red lipstick and black boots. It is unknown what her eye color is.

Pictures examined by Julia reveal she used to wear mainly purple. She had a lavender sun hat, purple lipstick, and brown-red hair, much like Carmen's. In all of her photos she is seen with a smile.

Due to pictures examined by Julia on Dexter Wolfe's case, she appears to be (as stated by Cruz's former neighbor) the spitting image of her daughter Carmen. She makes an official appearance at the end of the series, showing her with wild brown, red, and gray hair pulled into a ponytail with a red shirt and blue jeans, but since her back was facing the screen, her true appearance is ultimately left unknown, but it can be accurately assumed that she resembles Carmen, albeit older.

Vera Cruz was a mysterious woman that was presented with little information (since Shadowsan never met her nor even heard of her), but somehow she encountered V.I.L.E. Dexter Wolfe and apparently fell in love with him, becoming either his wife or lover. The two eventually had a child (that would later grow up to be the infamous Black Sheep/Carmen Sandiego), and (apparently knowing of Wolfe's occupation) devised a plan to run away and start a new life somewhere. However, when V.I.L.E. began to notice Wolfe's missions beginning to prolong and found him transferring Swiss bank accounts, they feared he planned on leaving and hired one of his students, Shadowsan, to assassinate him if deemed necessary. Unknown to the Faculty, Wolfe had planned to rendezvous with Vera and leave behind his old life, but fate seemed to have other plans. When Shadowsan found out the reason for Wolfe's behavior, his assassination attempt was foiled by Interpol interference, who had come to arrest Wolfe. Unfortunately, Wolfe was shot down by an Interpol agent and Shadowsan (unable to leave behind a child) took their baby daughter back with him to The Isle of V.I.L.E. where she was raised as Black Sheep. Vera's house was also burned down by Shadowsan to leave behind no evidence. What became of Vera afterward is unknown.

She owned the villa Dexter and Carmen resided in and supposedly died of an illness in 1999, two weeks before Dexter Wolfe's death. This was a fabrication by Wolfe to allow her to disappear. A coffin was buried with a headstone stating she lived from 1971 to 1999. However, it was empty, a hint that Vera was still alive.

In the third season, the hunt for Vera was still on, during which Carmen discovered Vera had another code name as Carlotta Valdez and lived in Veracruz, Mexico, for about a year before disappearing again. This search was halted due to Carmen's mission to take down V.I.L.E.

By the time of the fourth season, the hunt for Carmen's mother had almost diminished, for Carmen's focus was forced to return to V.I.L.E. The Chief of A.C.M.E. later discovered Vera's existence after researching Carmen's previous visit to the banks and uncovered the thief's birth records and belongings. After Carmen arranged a meeting with Chief, she agreed that she would give Chief the information she needed in exchanged for information on Carmen's mother. During the Chief's search, she discovered that Vera Cruz (real name Carlotta Valdez) was born and raised in Veracruz, Mexico, where she somehow met Wolfe and (according to Julia) had her 'civilian heart stolen by him.' It is revealed that two made it imperative to not be seen in public together, most likely to avoid V.I.L.E.'s prying eyes. It is then finally revealed that Vera Cruz is indeed alive, changing her name back to Carlotta Valdez and started a orphanage six months after Wolfe's death. This was speculated to have been an attempt to find her daughter, given the fact that no bodies were found in the ashes of her manor. Shadowsan later broke into the orphanage, where he discovered Vera's belongings, three of which consisted of her long-lost daughter and late husband/lover, Dexter Wolfe (showing she still misses and remembers them both fondly), and the final Matryoshka doll belonging to Carmen's own set.

At the end of the last episode, Carmen is finally given the case filed regarding her mother's information, and is finally give the chance to meet her. She is then seen arriving in Buenos Aires, Argentina, in front of the orphanage, prepared to meet Carlotta. Carlotta makes her first official appearance, albeit with her back turned to the screen, and opens the door, finally meeting her long-lost daughter.

Presumably, Carlotta was happy to see her daughter alive and well. As Carmen always had a soft spot for children, she may have moved in to help care for the orphans. 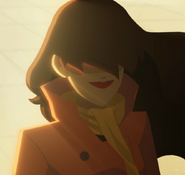