Pack your bags and grab your passport --- you're in for the adventure of a lifetime! Eight missions to complete, and you crack the case!

In Mission One, Carmen steals a rare copy of The Travels of Marco Polo. Agents Julia Argent and Shadow Hawkins have to find hidden devices and solve a few puzzles to crack the case. Go to Cuba and get the Item from the ACME agent hiding in the bushes. Then go to Japan and talk to the woman with the card games. Once you complete the game, take what the lady gives you and go to the Origami tree. Click on the white origami swan and it will unroll and become a note from Carmen. Go to the bookstore in Rio and get the book from the old man at the bookstore. Then go to the tour guide in Mombasa. Buy him some Ugali at the restaurant in Mombasa. Go to the train station. There is a clue from Carmen there. Go to the tour guide and give him the Ugali. Then go to Fort Jesus and click on the symbol on the door. Rearrange the pieces to match the clues you've already found. The door opens and the Travels of Marco Polo book is hidden there.

In Mission Two, Carmen steals another item. Find pieces of the clue to open a V.I.L.E. safe in Quebec (Password=MASK). Once you've opened the safe, Go to Thailand and get a scarf from the V.I.L.E agent there. Go to Mexico and click on the wall. Arrange the graffiti on the wall in the order of the animals on the scarf. The Item is hidden inside.

In Mission Three, Carmen steals another item. Go all over the world looking for clues that will open the safe in Capetown. (Hint: One is near a wolf statue in Quebec.) Once you collect all the pieces, arrange them in this order: Giraffe, Rhino, Zebra, Hippo, Elephant. The safe will open and you'll see a key inside. Open the disused door in Quebec and the Quipus is hidden there.

In Mission Five, Carmen steals an ancient Egyptian senet game table, which is the oldest known board game.

In the final mission, find the last set of clues. Arrange the gems in the correct order, then switch the rings to the correct code (Outer Ring=5 Middle Ring=2 Final Ring=) Within the chamber is Carmen Sandiego. You grab her, but she escapes using a smokebomb. The game is won, but the Chief says she's received word of another theft. The Agents redy their gadgets for the next game. 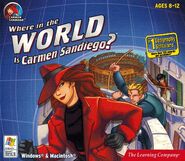