To Steal or Not To Steal

To Steal or Not To Steal

"You drive the action in this interactive adventure, helping Carmen save Ivy and Zack when V.I.L.E. captures them during a heist in Shanghai." [1]

While attempting to steal from a VILE building in Shanghai, Carmen learns that her friends, Zack and Ivy, have been kidnapped by VILE, who threaten to brainwash Zack and Ivy into VILE henchmen unless Carmen steals some objects for them. Carmen receives a tip from Player that Zack and Ivy are being held captive in a moving van outside the building. If Carmen attempts to rescue Zack and Ivy from the van, she discovers it was a ploy and Zack and Ivy are brainwashed, forcing the viewer to go back and agree to steal for VILE in order to continue the episode.

For the first task, Coach Brunt tells Carmen to steal a soldier from the Terracotta Army in Xi'an, China. While Carmen is outside the dig site, she runs into Tigress, who has been sent to aid Carmen in the mission. They enter an underground tunnel and fall into a booby trap, which Carmen escapes and has the option of saving Tigress from as well. Carmen enters the chamber to steal a terracotta statue, which is picked up by the cleaners in a helicopter just as two guards enter the chamber. If Carmen hitches a ride into the helicopter, her weight causes the statue to fall and break, angering Coach Brunt and leading to Zack and Ivy's brainwashing. If Carmen instead hides among the statues, she eludes the guards and escapes from the chamber.

Dr. Saira Bellum and Countess Cleo vie to direct Carmen's next task. Carmen is allowed to choose who she steals for first, but not before being allowed to speak to Zack and Ivy and taking a photo of them in their prison. She sends the photo to Player, who uses it to find out where their location is.

Cleo sends Carmen to Monte Carlo, Monaco to make off with some expensive Beluga caviar from a charity gala. At the event, where Mime Bomb is performing, Carmen locates Julia Argent, who had been tipped off about the stolen terracotta warrior and VILE's plan to steal the eggs. Carmen can either trust Julia with the truth that she is stealing for VILE or lock her on the roof of the building while she steals the caviar. If Carmen decides to stash the eggs, she is interrupted by Mime Bomb choking on the hors d'oeuvres. She saves him with the Heimlich maneuver, but when she enters the kitchen the eggs have already been removed from their tins, leaving them with one day until they expire. She still escapes with them, but Cleo declares Carmen to have failed and Zack and Ivy are brainwashed. If Carmen decides instead to grab the cart of tins and walk out with them, she successfully flies out of the gala.

Dr. Bellum instructs Carmen to travel to Hell Creek, Montana to steal a Tyrannosaurus rex bone with tissue still intact. Once Carmen arrives and locates the bone, she can choose to recruit El Topo or Le Chevre to help her escape. Once inside the museum where the bone is kept, she discovers that ACME agents have surrounded the building. If Carmen attempts to hide behind a model dinosaur, it collapses and Carmen is forced to flee without the bone, resulting in Zack and Ivy being brainwashed. If Carmen makes a run for the lab to steal the bone, she escapes through the air duct and secures the bone for Dr. Bellum.

After the second task, Carmen checks in with Zack and Ivy again and takes another photo. She and Player deduce that Zack and Ivy are being held within the Arctic Circle. Carmen can choose to either attempt to rescue Zack and Ivy or continue with VILE's third task. If Carmen chooses the rescue mission, Tigress helps her into the facility where they are held if Carmen saved her from the booby trap. Carmen saves Zack and Ivy, but VILE keeps the items that she stole for them. If Carmen did not save Tigress, Carmen is forced to take a longer route which leads to Zack and Ivy being brainwashed. They initially appear fine and go out for ice cream with Carmen, but then capture her.

If Carmen takes up both Cleo and Dr. Bellum's tasks, VILE arranges for Carmen to board a ferry to the Île d'Oléron, where Zack and Ivy have been relocated in exchange for the items she stole. At the airport, she runs into Julia and asks for her help. If Carmen locked her on the roof in Monaco, Julia refuses to help and Carmen is forced to rescue her friends herself. VILE captures Carmen while on the ferry and brainwash her along with Zack and Ivy, which Carmen had surmised was their plan all along. If Carmen had trusted Julia, she agrees to pose as Carmen on the ferry while the real Carmen rescues Zack and Ivy and escapes with them in a helicopter. Carmen delivers the items she stole to Julia's doorstep so they can be returned to their rightful places.

Upon finding either good ending, a bonus scene will be unlocked, with all of the cast members but Carmen and the Chief singing the theme song from the 1990s game show.

The special was first reported to be in development by Bloomberg on August 8, 2019.[2] The Carmen Sandiego Twitter account officially announced the project on February 10, 2020, for release on March 10, 2020.[3]

In a review for Polygon, Petrana Radulovic comments "Though the way the multiple endings play out hint at the potential of more branching paths, the experience never really feels interactive."[6]

Sam Stone of ComicBookReport.com "Fun, genuinely engaging and a natural continuation of Netflix's original animated series, Carmen Sandiego: To Steal Or Not To Steal is a strong example of the streaming platform producing new interactive ways for audiences of all ages to participate in its programming."[7]

ENDING SPOILER Interactive Carmen Sandiego To Steal or Not to Steal? Netflix Futures 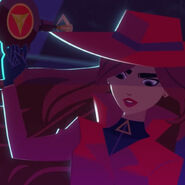 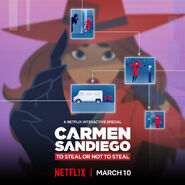 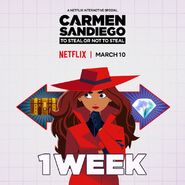 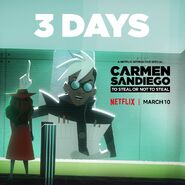 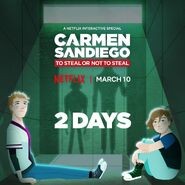 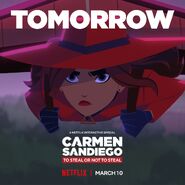 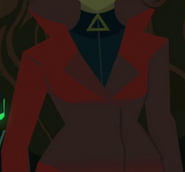 Carmen Sandiego- To Steal or Not To Steal? Interactive Game Trailer

ENDING SPOILER- Interactive Carmen Sandiego- To Steal or Not to Steal?