Tigress is an operative of V.I.L.E. in the 2019 Netflix animated series Carmen Sandiego. She also Carmen's rival and was a classmate of hers at V.I.L.E. Academy.

Her birth name is Sheena. Not much is known about Tigress’ history, although when she claims to have earned her stripes after naming herself Tigress, this could hint to her having been a petty thief before coming to V.I.L.E. and becoming a professional one. Tigress has often been vain and mean to others, likely even before enrollment. When she and Carmen (then Black Sheep) first met, they did not get along well, but still considered each other allies (at least in regards with their other teammates). After Carmen defected from V.I.L.E., their rivalry grew stronger.

When encountering Carmen in Java, she was readying a bioweapon fungus to destroy the rice supply of Indonesia, but was stopped by Carmen's friends as she was too focused on her old rival.

She's also snarky and rude to the other classmates, especially Mime Bomb. Despite her behavior, she works with him during The Lucky Cat Caper while in San Francisco.

Sheena was already a criminal, having previously "earned her stripes", but joined V.I.L.E. to become an even better crook. She favored shoplifting, especially jewelry and expensive trinkets.

Tigress is ruthless, aggressive and a talented field agent, but also extremely vain, arrogant, competitive and willing to hold a grudge. She is equally unpleasant to allies and enemies alike, and if she takes a particular dislike to someone (such as Carmen/Black Sheep) she goes out of her way to belittle, demean and taunt them, which sometimes causes her to waste valuable time. She also underestimates her opponents on occasion. However, she isn't completely without gratitude, as shown “To Steal or Not To Steal”.

Sheena is a physically fit, and athletic female of at least 20 years old. Her hair is either fully white or platinum blonde. She has a small beauty mark under the right side of her mouth and has baby blue eyes.

Tigress wears a mask that contains high tech functionality like night vision goggles (also making her eyes look green). She wears a catsuit that includes a pair of gloves with razor-sharp claws and black thigh-high boots with heels. She can view through anything, and use special vision modes to track targets.

Tigress is a very able and powerful fighter. Her fighting style is primarily aggressive and forward, and she uses a lot of acrobatics and her razor-sharp claws to attack enemies. 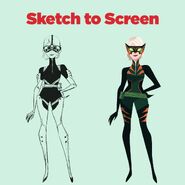