The Troll is an operative of V.I.L.E. in the 2019 Netflix animated series Carmen Sandiego.

A skilled hacker and computer tech, he was called upon by the Faculty in the Season Three episode "The Haunted Bayou Caper" to obtain thermal and satellite views of the mansion of famous New Orleans chef, The Crawfish King, where a charity costume party was being held, which would aid Tigress and Paper Star in navigating the secret corridors it contained.

He was later seen attempting to instruct The Cleaners on how to utilize a retinal scan phone app on the kidnapped Crawfish King in order to transfer the charity money from his account into V.I.L.E's instead of the charity's.

He is seen again in "The Jolly Good Show Caper", working with Faculty member Roundabout on a scheme to trap Carmen Sandiego with a fake Crown Jewels heist. He used his tech skills to hack into Player's computer systems and set off the alarms, leading to Carmen's capture. When Roundabout went in to steal the jewels himself, he then disabled the alarms and overrode the security cameras to make him undetected during the theft. However, Carmen turned the tables on them, and Player hacked into The Troll's systems.

In The Robo Caper, The Troll says that he looked into the Iceland CCTV cameras and found Graham on the police network, helping V.I.L.E. to get to him before Carmen does.

He was briefly seen at the end of The Dark Red Caper among the list of V.I.L.E. operatives being hunted by ACME. His photo was not marked as captured, so it is presumed he is still on the loose.

The Troll is shown to be extremely confident in his hacking abilities, to the point of being obnoxious and arrogant. This leads him to underestimate his opponents, something that resulted in him being outwitted by Player.

He also seems to be very proud of his moniker to the point of being pedantic, demanding to specifically be referred to as THE Troll as opposed to simply Troll. His status of being V.I.L.E.'s hacker may have a role in this as sought hacking as a game evident when he challenged Player's hacking skills through some friendly banter.

For all his flaws however, he is shown to be rather professional, immediately aborting a mission once the agreed upon time table had passed.

Zack described him as an evil version of Player, and like Player, the Troll has demonstrated he has a high proficiency in encryption breaking, hacking and data collection. He possesses an advanced computer setup, from which he can hack into systems most anywhere in the world. 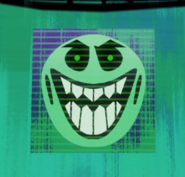 The Troll's signature logo, it resembles a troll face