The French Connection Caper
The Lucky Cat Caper is the eighth episode of Season 1 of Carmen Sandiego.

In foggy San Francisco, Carmen attends an elegant charity auction, and after buying a car from Zack's favorite film series, learns Mime Bomb stole a rare stamp worth $10 million, and follows his trail to Chinatown. When Mime Bomb calls in to report, Shadow-san sends in Tigress, but Coach Brunt believes something will go wrong and sends the Cleaners as unseen backup. A vote is called, but Bellum is too busy trying to hack the A.C.M.E. card, so she votes "yes" to get it out of her way. But when Mime Bomb spots Carmen observing him, he leaves the Lucky Cat statue he had in a shop. Yet, while Carmen and Tigress fight over it, Mime Bomb slips the stamp into Chase Devineaux's coat as the Agent interrogates him, then releases him. Later on at Fisherman's Wharf, Tigress gets the stamp by covertly cutting through Devineaux's coat, leading Carmen, and by extent Devineaux, to a chase to the Golden Gate Bridge. Devineaux crashes the car into the river, while the Cleaners rendezvous to get Tigress, but Carmen manages to swipe the stamp from her and escape with Tigress' phone to call V.I.L.E. and gloat. As Coach Brunt mocks Shadowsan's decision, Dr. Bellum announces she at least found out the owner of the A.C.M.E. ID Card: Chase Devineaux.

For the full episode transcript, see: The Lucky Cat Caper/Transcript 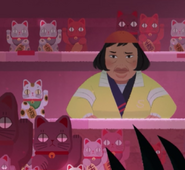