Carmen's team is an international group of professional thieves featured in the 2019 Netflix series. The team primarily specializes in theft-recovery work, travelling around the world and stealing back various treasures that were stolen by V.I.L.E.

After Carmen severed her ties with V.I.L.E., she assembled her own team, consisting of a white hat hacker known as Player and a pair of siblings, Zack and Ivy.

As of the first-season finale, it was revealed that V.I.L.E. Faculty member Shadowsan had secretly been operating from behind the scenes to aid Carmen and her group in dismantling V.I.L.E.'s activities, making him an unofficial member. In the second season, Shadowsan officially abandons V.I.L.E. and joins Carmen's team as a full member.

The following are members who served among the group's ranks since its formation. 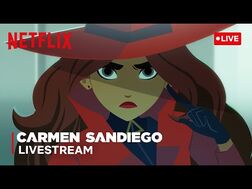