Doctor Saira Bellum is a member of V.I.L.E. and one of the V.I.L.E. Faculty who act as the masterminds of the organization and instructors at the academy, with her classes dealing with the use of technology and science in heists. She is also their chief scientist who creates all of their weapons and gadgets.

Dr. Bellum is a small woman with a bushy white Mohawk, who is always seen wearing a pair of teal colored welding-style goggles, which are prescription and necessary for her to see, and a white lab coat.

In her younger years, she wore her hair in a "Bride of Frankenstein" style.

A genius in many different fields, she has contributed greatly to V.I.L.E.'s technical capabilities, and is also fond of watching cat videos on the Internet, researching baking recipes, and enjoys doing various other things that seem to go against the more serious personalities that her fellow teachers tend to display.

Bellum constructs and develops all the advance technology for V.I.L.E., and has R&D labs in various other countries working on technological and biological weapons, such as specialized crop-destroying fungus spores, mind manipulation devices, and robot thieves.

Bellum has also shown to have a genuine fondness for at least some of her students, particularly Gray, who shared her love for science. When the time came that Gray needed to be decommissioned from V.I.L.E., Bellum was quick to reassure him that the process was relatively painless, and after Le Chevre later made fun of Gray after his memories were erased, Bellum furiously threatened to do the same thing to him if he didn't shut up, suggesting that his absence still pained her.

She has shown a dark side, being willing to destroy Indonesia's rice fields in order to sell V.I.L.E. instant imitation rice to the population at an inflated cost, with seemingly little regard for the starving people who wouldn't be able to afford the large prices. She absolutely abhors idioms and turns of phrase, as they can easily confuse her.

Originally from India, Dr. Bellum is a scientist who had a penchant for inventing elaborate devices Having been one of the five members of V.I.L.E. Academy who contributed to Black Sheep's upbringing, she was one of the four members who supported her admission to V.I.L.E. Academy.

After the incident in Morocco, Bellum monitored Black Sheep, hoping it would make her more complacent to V.I.L.E. for her remedial year knowing she was being watched.

As one of the five masterminds of V.I.L.E., Dr. Bellum has near supreme authority in the organization. 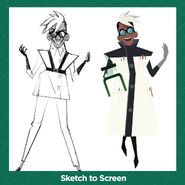