"You can call me...Player."
―Player, "Becoming Carmen Sandiego: Part I"

Player (last name: Bouchard) is a teenage hacker who currently assists Carmen Sandiego in her capers against V.I.L.E. He first made contact with Carmen through a phone she stole from the Captain during her time on the Isle of V.I.L.E.

Player is a young teenager with side-fringed dark brown hair, greyish-blue eyes, and tan skin. He wears a grey and red jacket over a red shirt, with navy blue shorts and grey sneakers. He is also the shortest member of Team Red.

Despite being the youngest, Player was portrayed as being one of the most mature members after Carmen and Shadowsan. He is a talented hacker, being able to contact Black Sheep's stolen phone after hacking through V.I.L.E. Academy's 27 layers of security. As a White Hat hacker, he uses his talents only for good reasons and seems to have a strong moral compass. He tends to ignore personal property when he hacks into computer systems and suggested breaking into Lupe Peligro's house.

He seems mild-mannered and makes jokes often, being able to hold light friendly banter with Carmen. He mentions being perfectly happy in his "dark little cave", and doesn't seem all that interested in going outside for himself. His home schooling may factor into this. It's possible he's more interested in experiencing the world vicariously through Carmen's adventures. His reserved attitude seems to extend to Carmen as he never told her about his family or his early life during the events in season 1. He only tells Carmen when she pressures him in the events of Secrets of the Silver Lion.

He's surprisingly quick to trust Black Sheep initially, even when her answers don't seem to make much sense at first, and chooses to go with the flow and believe her when she does admit she's in a school for thieves. Despite the trust he showed to Black Sheep, the current Player was reluctant to trust and at most times against trusting Crackle, Chief, and Shadowsan on multiple occasions in seasons 1 and 2. This sudden paranoia could be caused by past mistreatment towards Carmen. This is farther proven when Player becomes wary when Carmen collaborates with former/current enemies and would constantly influence Carmen's faith in their word.

He's confident in his skills and his friends, though he still shows concern for Carmen when things turn dicey. This could be because he assigns Team Red their capers and if it goes wrong, Player couldn't do anything but coordinate the team and listen in through audio, basically giving him a sense of hopelessness. His young age and friendship with Carmen may also factor into this. His age and mild-mannered nature opts him to follow the orders of Carmen and Shadowsan with the attention to support the team (even if reluctant to do so). Though he's usually mature, Player still participates in Halloween activities like dressing in costume.

Before meeting Carmen at the age of twelve, Player had a slightly troubled childhood, as was revealed in Secret of The Silver Lion.

According to Player himself, his father ran out on him, leaving Player and his mother alone. He spent several months tracking the man down (and along the way developing the skills he'd later use to assist Carmen and the other members of Team Red) but, upon finally finding his father, Player came to the realization that his mother and him were better off without him. (Though not before messing with his father's 'account numbers').

Sometime after coming to this decision, his mother remarried to Player's current step-dad (who he seems on good terms with, even calling him a 'great guy').

Player now appears happy with his life. Though, like most people with troubled pasts, speaking about his childhood can cause him significant distress (as Carmen herself notes).

"I just hacked through 27 layers of encryption.
So, who do I inform about weak link over there?
"
―Player, "Becoming Carmen Sandiego: Part I"

As described as Carmen's secret weapon, Player has demonstrated he has a high proficiency in encryption breaking, hacking and data collection.

He has provided invaluable technical support to the team.

Player lives with his family in Niagara Falls, Ontario, Canada. Before he turned twelve, his parents had an argument and his father decided to leave. At some point during his father's disappearance, Player used his newly required hacking skills to try to find his father. Player had succeeded this but decided he, his mother, and his father were fine, so he did not pursue. Some time after Player's mom remarries a "great guy". Player uses his hacking skills as a white hat hacker and eventually hacks his way into V.I.L.E..

Player first met Carmen (back when she was Black Sheep) when hacking into V.I.L.E.'s security. Player was Carmen's only connection to the outside world, and they quickly became friends. Player would constantly talk to Carmen when she is out of class and alone with no prior knowledge on where or who she really is.

Player aided Carmen with finding her way into the world when she escapes V.I.L.E.'s clutches.

After months of planning, Player and Carmen would investigate a V.I.L.E. business front called Darryl's Donut Hole. This led to Carmen meeting Zack and Ivy, who would become members of the team.

"You know I'd never miss a night out with you, Red"

"You just look... taller than i thought you would in person"

"Sure, it does. I just hacked through 27 layers of encryption. So, who do I inform over there about the weak link so you can upgrade your security?"

"Where have you been!? Strange people have been answering your phone."

"So how come failing Shadowsan’s final is still bugging you?”

"I’m seeing a disarm code. And I’m hearing a speech coming on.”

"Slick move, Red. I’ll analyze the image for any clue to the location of their VILE prison.” 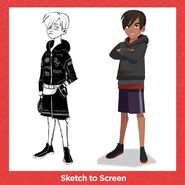 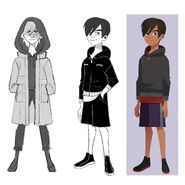 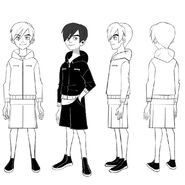