Strap on pouches to carry wads of paper

Kimiko Glenn
Paper Star is an agent of V.I.L.E. still training at V.I.L.E. Academy but granted permission to take down her rival and former classmate Black Sheep who is now Carmen Sandiego. She can use her origami skills to turn paper into various razor-sharp weapons, most often shurikens.

Paper Star is shown to be clinically psychotic, taking great enjoyment out of her missions and being willing to inflict pain on others to get what she wants.

She also possesses an extremely high intellect, enough to earn favor with Maelstrom and rivaling that of Carmen Sandiego herself. Due to her capable athleticism and origami skills with only one hand, she was able to easily counter Carmen in melee combat; until the latter used high wind speeds to nullify the paper weapons used.

She also noted that Le Chevre was likely to fail the mission if she gave the Magna Carta to him stating with sardonic humor that he was the kind of person who would end up getting caught, suggesting that she is a very good judge of character.

As noted above, Paper Star was not above using torture tactics if it meant achieving her goals and appeared to show no hesitation in using them on her own ally after Le Chevre tried to refuse her.

This all suggests that, much like Carmen, the only side Paper Star is truly on is her own.

Paper Star has her hair split into two 'side buns', one black and the other white, full lips, and dark brown eyes. She is shown wearing a neon green leather jacket with spikes over a V.I.L.E. stealth suit, heavy purple lipstick on her lips, multicolored nail polish, and dull purple thigh-high platform boots.

Not much is know about Paper Star, except that she attended VILE Academy during Carmen's make-up year, has an affinity for making very sharp origami objects, much to Shadowsan's chagrin, and is mentally psychotic, much to the delight of Professor Malestrom and to the dislike of Le Chevre when he first meets her.

Carmen had her first encounter with her during the year she was held back. In the book, “Who In The World is Carmen Sandiego?”, it was stated that Carmen would give her extra origami paper when she asked for it in Shadowsan's class, and complimented her handiwork on an origami army she made, until Paper Star beheaded the army with a paper ninja star. Despite her psychotic behavior, Paper Star has proven to be a prodigy, much like Carmen.

Paper Star was deployed for duty after the "The Opera in the Outback Caper" was foiled by Carmen and her team. This allowed for the Faculty to send her on her first mission in "The Chasing Paper Caper", where she was assigned to steal the Magna Carta in Mumbai, India.

While she did not succeed in her mission, she did return to V.I.L.E. Academy with something much more valuable: Chase Devineaux's A.C.M.E. Card which, thanks to the high tech gadgetry in it, allowed Dr. Bellum to reverse engineer it and learn more about the detective agency.

Later, she was brought to Japan by V.I.L.E. agent Lady Dokuso, to aid her in setting a trap for former V.I.L.E. faculty member Shadowsan, who had arrived in Matsumoto. Paper Star acted as the decoy to distract Carmen while Lady Dokuso stole the wakizashi from a daisho that Shadowsan had tried to steal in his youth, thinking he had returned to Japan to complete the set.

While succeeding in that part, they battled again when Carmen attempted to reclaim the sword, and managed to do so and beat Paper Star by having her use paper lanterns that had been coated with glue, causing them to stick to her and wrap her in them.

She is later partnered up with Tigress on a mission to infiltrate the charity Halloween party being hosted in the mansion of famous New Orleans chef, the Crawfish King, in order to abduct him so that The Cleaners could use a retinal scan app to transfer the charity money out of his account and into V.I.L.E.'s. Carmen and her team managed to rescue him before the funds could be transferred, but Paper Star discovered a secret safe in the hidden catacombs of the mansion. Using her skills, she fashioned an origami key and unlocked the safe, discovering that inside was the secret recipe for the Crawfish King's seasoning, which had been passed down to him from his great great grandmother. She swiped it and attempted to escape with it, but Carmen distracted her with a ghostly disguised Red Drone, which caused her to drop the recipe and fall off the balcony into the moat, where the Cleaners and Tigress arrived in an airboat to pick her up.

In the series finale episode, The Dark Red Caper, she was one of the V.I.L.E. operatives shown to still be at large on ACME's list. Two years later, ACME agents Chase, Julia, Zack, and Ivy find her tied up at the front of a museum by Carmen.

Paper Star has incredible origami skills, specializing in folding paper throwing stars sharp enough to cut through stone. She is not limited to merely origami paper, and can use any paper on hand. She can use them as daggers and can fold them fast enough to make a veritable storm of razor origami art.

In The Haunted Bayou Caper, she was able to fold a sword sharp enough to pierce a wood bowl out of aluminum foil. 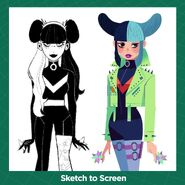 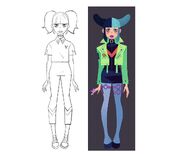 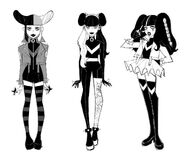 Profile from Where in the World is Carmen Sandiego?