Unknown (possibly in his early-twenties)

Mime Bomb is an agent of V.I.L.E. in the 2019 Netflix animated series Carmen Sandiego.

Very little is known about Mime Bomb. What is known is that he works for V.I.L.E., and he was part of Black Sheep's class of rogues.

Though ridiculed for his commitment to pantomime to the point that he speaks in games of Charades, Mime Bomb is the perfect stealth observer. He moves so quiet sometimes that people almost don't notice him.

Because he is dedicated to his dramatic persona, he either blends in as a "creepy clown" or "annoying street performer". Only a person with a keen eye would suggest he is suspicious or a formidable threat.

Nevertheless, that still didn't stop A.C.M.E. Detectives Chase Devineaux and Julia Argent from trying to question his frequent appearance in their location in the The Lucky Cat Caper. Sure enough, his lips were sealed and they acquired very little information from him when he was being interrogated.

He later reappeared in the Season Three episode "The Masks of Venice Caper", working with Neal the Eel to steal a collection of valuable masks from a museum in Venice, Italy. However, they were foiled by Carmen and instead wound up with a box of souvenir replicas. Mime Bomb noticed the police approaching and attempted to warn Neal, but because he didn't speak, Neal didn't understand him. With no other choice, Mime Bomb abandoned his partner and dove into the canals to escape. As he surfaced, his makeup had been washed off, and due to the cops being told one of the suspects had the painted face of a mime, they ignored him as he passed them by, allowing him to escape.

In Season Four's The Beijing Bullion Caper, Mime Bomb disguises himself and takes the place of Huang Li, the manager of the gold bullion in China's largest bank, who was performing in the Peking opera, after he was incapacitated by Lady Dokuso. He lip-syncs the singing, which is played through a hidden loudspeaker, but Carmen and Huang Li's daughter, Xifeng, immediately detect his presence. After Huang Li is returned safe, Xifeng spots Mime Bomb and kicks him into a pile of boxes, where a broom falls and knocks him out. He later escapes with Lady Dokuso and reports the missions failure back to the Faculty.

In The Dark Red Caper, Mime Bomb is captured by ACME and is locked up in a criminal asylum next to Professor Maelstrom.

Mime Bomb has been described as quiet by El Topo and weird by Tigress.

Mime Bomb is seen as an opportunist, immediately tattling to V.I.L.E Faculty when witnessing Carmen stowing away on the graduate mission during her holdover year, and secretly hiding a rare stamp in Detective Chase Devineaux's coat when he was on to him.

In the Clue by Clue novel, Mime Bomb is said to be skilled in symbology and crpytanalysis according to Professor Maelstrom.

He is also prone to avoiding fights or physical contact when possible. When fighting Sheena in the Who in the World is Carmen Sandiego novel, she easily beats him while he is distracted. When offered a helping hand to his feet by Black Sheep, he declines with a shrug and silent nod. In Clue by Clue, when Le Chèvre and Tigress are fighting Carmen, he stands off in the sidelines and shadowboxes rather than assisting.

Mime Bomb is a thin, red-haired young man who looks like a stereotypical mime. He wears a grey and black striped shirt, black beret, white gloves, black spandex and black shoes. His makeup consists of white face paint, black face paint around the eyes and on the brows, and a light red shade of lipstick. 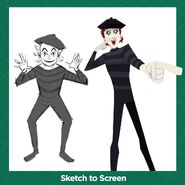