Julia "Jules" Argent is a detective at A.C.M.E. Chase Devineaux's partner at Interpol and A.C.M.E. (formally) and currently Agent Zari's.

After discovering that Carmen didn't just break into an ordinary house but a house full of stole goods taken by V.I.L.E., she came to the conclusion that Carmen might not be a thief who steals for herself but a thief that steals from other thieves. Due to an unfortunate turn of events where Devineaux was instantly distracted by his car breaking down, the possibility of coming to that conclusion together was missed. Thus resulting in a tarnished opportunity for future cohesion and true teamwork. This would cause Chase to be arrogant towards Julia's views on Carmen's motives which would instil a rift between the two until an eventual argument would break out as a result.

It is clear that Chief favours Argent throughout her time at A.C.M.E and often compliments her skills and deductions and makes sure they are highlighted and given chances lead with her opinions. But it is also apparent that The Chief is wary and later down the line critical of Julia's persistence that Carmen Sandiego is good, rather than pure evil. This is put to the ultimate test in the episode: ''The Stockholm Syndrome Caper'' when a chance, that could possibly ruin her career, is afforded to her after her continuing persistence to give Carmen a chance. The Chief allows her to talk to Carmen Sandiego alone, without interference when in tailing what they thought was Carmen Sandiego (but was actually Ivy in disguise). This is to The Chief's short patience and even Agent Zari's dismay when informed in the change of plan. This is initially successful where Julia attempts to instil trust between the two parties, insuring that A.C.M.E is merely here to help, but this is short-lived. A.C.M.E promptly storm The Belltower causing Carmen to flee and subsequently injured in the pursuit.

Throughout her time within A.C.M.E and as Agent Zari's partner, her opinions on who is truly good and evil are thrown quickly into true doubt when Shadowsan (his name unknown to them) appears beside Carmen Sandiego in ''The Hot Rocks of Rio Caper, Part 2''. Agent Zari informs her that one of the two people identified by Devineaux as his kidnappers, was the one beside Carmen after they disappear when perused. This shocks her, after previously in the episode disputing what Devineaux saw as being possibly incorrect or not what he thought he saw.

Julia Argent is an incredibly intelligent individual. Argent remains calm and levelheaded even during stressful situations Argent is extremely well collected and professional but also has a slightly goofy and innocent side (has been seen talking to herself in mirrors and holding fingers guns up to herself before smacking her face into the wall). She is a very caring person even to those who have previously wronged her (in the case of Chase Devineaux on various occasions) and is willing to give multiple chances to people, ultimately having the belief that no one is truly a bad person or evil. Julia's prefers to give one the benefit of the doubt.

Argent is very soft-spoken and serious with her work at A.C.M.E, yet remains sharp and focused on duty. Julia has once even shown to be quick-witted and willing to make a joke at anothers expense in a more formal way than others. Julia once made a swift comment to Devineaux after he lost his keycard, unable to open the secret office to interrogate Mime Bomb. Concluding that his 'lucky jacket' isn't so lucky if it has previously brought him so much misery when wearing it. A few instances she has even retorted back with implied sarcasm to Devineaux frustrations or comments of the situation, proving she is not intimidated by Devineaux or anyone, something that he is aware of.

If pushed, she will assert herself to make her case; such as when Devineaux accused her of being silent partners with Carmen, spurring an argument between them where Julia let out her true frustrations with her then partner. As well as when tensions run high between her and Agent Zari in ''The Hot Rocks of Rio Caper, Part 2''. Proving that she is strong-willed and very sure of herself, her beliefs, abilities and intelligence, something Chase Devineaux and The Chief comment on either to themselves during self-reflection or directly to her.

A young woman in her mid-20s. Julia Argent has short cut hair black hair with a blue shine and fair skin who wears darkly rimmed round glasses. Julia Argent is of mixed-heritage of Chinese and British[1], having a fair skin tone with freckles on her cheeks and nose bridge. She dresses professionally and has a slender build of a female law enforcement officer with applicable physical activity. 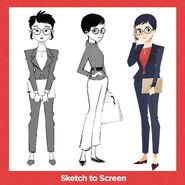