The other members of the V.I.L.E. Faculty

Professor Gunnar Maelstrom is a doctor of psychology, professor at V.I.L.E. Academy, one of the five members of the V.I.L.E. Faculty, and is a practitioner of psychiatry. He is often seen with some sort of Rorschach inkblot test nearby.

He is also a criminal mastermind who teaches students at V.I.L.E. Academy how to steal and to become expert confidence artists. His classes tend to deal with psychological manipulation in crime, such as the classic bait and switch.

Professor Maelstrom is a middle-aged man with pale skin and white hair with a receding hairline. He has broad shoulders and wears a black blazer over a dark gray turtleneck.

As stated previously, Maelstrom is seen as being an almost unnaturally pale color, hinting towards possible Albinism.

Of the five members of V.I.L.E's faculty, Maelstrom seems to command the most authority and serve as the de facto leader of the group, being the first to speak as well as hand out orders.

As one may expect, Professor Maelstrom is criminally insane, which is ironic, considering his forte is psychiatry. Professor Maelstrom often likes to tinker with his patients' psyches and enjoys psychologically evaluating students, much like someone finding joy in pulling the wings off a butterfly. He does possess some level of awareness to his own insanity, though he is quick to brush it off as a mere label that other weak-minded people have given him. He also has an apparent fondness for the more psychotic recruits. In keeping with his name, his main desire is to spread chaos and disorder, with any actual gain being a secondary concern at best.

Carmen considered him to be creepy, and rightfully so after he and Dr. Bellum collaborated to wipe Crackle's brain.

Professor Maelstrom loathes Cookie Booker as he has no tolerance for her stuck up behavior towards him.

He seems to have a fondness for marine life, as his office hosts a giant aquarium filled with jellyfish and other specimens. His use of the term "bait" as a pun is in reference to fishing bait, and in the novel adaptation, it is used twice. Further expanding the psychological exam scene from the show, in the novel, he declares that Carmen gave the "wrong" answer to the Rorschach test, stating that the image was a seahorse.

The novelization expanded his sense of humor, though it mentions that even that had a dark and unpredictable tinge to it, showing delight in the lengths that his students would go in order to not be called upon in class. The show does have him throw a small quip every once in a while, often tinged with exasperation at his colleagues' antics or ignorance.

He also enjoys making Countess Cleo envious of his fashion style, having asked Le Chevre and El Topo in the "The Fishy Doubloon Caper" to acquire an Ecuadorian Eight Escudos doubloon to be melted into solid gold cufflinks.

As of season 4, it becomes clear that Maelstrom is incredibly disloyal and self-serving, as he was more than willing to leave Brunt behind back in Scandinavia and tried to weasel his way out of ACME's raid on V.I.L.E., completely fine with leaving his other members behind, although this ironically became his downfall as ACME had seen it coming. It was also confirmed that he was mentally insane, being placed in an asylum for his crimes.

Gunnar Maelstrom is originally from Scandinavia (implied to be either Swedish or Norwegian).

After the incident in Morocco, Dr. Maelstrom subjected Black Sheep to more psychological tests to examine her psyche. That same year he was conducting tests on Black Sheep, he was training a new ward, Paper Star, whom he considers his star student because of her psychopathic tendencies.

As one of the five masterminds of V.I.L.E., he has near supreme authority over the organization.

He is capable of expertly performing a bait and switch. 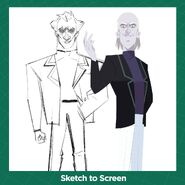