Michael Goldsmith
Graham Calloway, or Gray (a.k.a. Crackle) was an agent of V.I.L.E. in the 2019 Netflix animated series Carmen Sandiego.

Gray previously worked as a junior electrician at the Sydney Opera House, and joined V.I.L.E. after he felt that his job was going nowhere.

While training at V.I.L.E. Academy, Black Sheep/Carmen Sandiego looked up to Gray as a big brother figure. However, after the caper in Casablanca, she started to have second thoughts after he almost killed an archaeologist with Dr. Bellum's Crackle Rod. After Black Sheep left the academy and changed her name to Carmen Sandiego, their friendship dissolved.

Sometime later, Carmen would meet Crackle again on a train in Poitiers, France bound for Paris where she explained to him her relationship with V.I.L.E. and he revealed V.I.L.E.'s true identity. He asked her to come back to V.I.L.E but of course, Carmen said that she would never enter the island again. At the end of the trip, Carmen subdues Crackle just in time for Inspector Devineaux to assume he has apprehended Carmen who dressed Crackle in her red coat and hat.

While in custody of Interpol, V.I.L.E. ordered Crackle to be extricated by The Cleaners and returned to V.I.L.E. Academy for decommissioning a process which includes a mind wipe with one of Dr. Bellum's inventions.

Following his disposal, Gray was returned to Sydney, Australia to his job as an electrician at the Sydney Opera House having no memory of the years he spent at V.I.L.E. Academy or Carmen. At the time, he uses the name Graham. At the opera "Carmen" they meet and arrange a meeting at his favorite cafe. Though Carmen thought this would be a chance to start over with Gray, Player suspects that becoming involved with him, could be a trap as he could be reactivated with a subliminal message. Carmen, after returning from her mission to stop an incomplete rocket from launching, arrives to where Gray is waiting for her in the cafe but decides to leave, thinking him having her back in his 'fresh start' would complicate things. Gray spots Carmen at the bus stop, and sees that she saw him as well. But when a bus passes in front, and she disappears, he is left dumbfounded, and appeared to be a little hurt, as Carmen had stood him up.

In the 7th episode of the second season (The Crackle Goes Kiwi Caper), he is shown to be reading in the same cafe when Carmen approaches to tell him she needs help with her 'charity show' for the Dance of the Swans. He then agrees on a condition that she this time comes to the cafe where Gray will be waiting there for her, so he might have meant it as a date.

He is not seen again until the end of "The Jolly Good Show Caper" where he walks down a street although unknown to him ACME is watching him.

During the first part of Season 4, A.C.M.E. brings Gray in and uses a experimental device to unlock his blocked memories of V.I.L.E. Gray escapes A.C.M.E and his memories begin to slowly come back to him.

In the series finale, after being arrested in Reykjavik he asks A.C.M.E.’s chief to restore Carmen’s memories after finding out she had been brainwashed. He states that Carmen didn’t choose a life of crime unlike the rest of V.I.L.E., and A.C.M.E.’s chief agrees to use the device on her. He fights with the brainwashed Carmen, but after a little while he manages to get the device onto her head, which undoes the brainwashing.

He is last seen in a hospital bed, being talked to by Chief.

Initially cocky about his new role, Gray was eager for a career change. He was known to underestimate his opponents as when he first underestimated Carmen for her nickname, as well as on the train where they meet once again. Despite working for V.I.L.E., he was willing to stick up for his friends after Black Sheep's annual water-ballooning of Cookie Booker and her boat's captain. The incident almost got them expelled but by self-sacrifice, he was able to get the team off with an afternoon of detention where they would come up with their code names. He acted like a generally nice person after apologizing to Black Sheep and became a big brother figure in the group, despite his profession. He was not overly serious in his profession, although he didn’t take it overly lightly, either, keeping both a laidback and dedicated sense of self in his new job. However, he became somewhat distant after Black Sheep discovered the truth behind V.I.L.E., although it was clear he still cared about her. His loyalty and care for Black Sheep/Carmen hadn’t fully diminished, as he was shown trying to talk her back into joining V.I.L.E., but then forced himself to further harm her after she refused, which hurt him deeper than he would have liked to admit.

After being brainwashed, Gray returned to a normal life, oblivious of his former life, and appeared to have a bit of a snarky and mean side, but ultimately was a friendly man with a certain bit of charm and dedication to his job, hinting he still possessed a cocky side. He also appeared to be somewhat flirtatious, after asking Carmen out to his favorite café, which hints he may have an attraction towards her. All of this came from his obliviousness to his memory loss.

His new life, however, was shattered after he was unintentionally dragged into Carmen’s new heist to take down a V.I.L.E. mission, where he unknowingly assisted her under the guise of a technician-hand. It was also shown that he had some knowledge on operatic culture, most likely from working at the Sydney Opera House. After discovering the ruse, although no memories resurfaced and he was not caught in the act by V.I.L.E., his curiosity and suspicions on his role in the heist, along with his connection to Carmen, would only lead to him getting on A.C.M.E.‘s radar.

When he was taken in by A.C.M.E., he began to question himself when his memories began to resurface, and unknowingly shifted between his amnesiac self to his more cunning thief side, which left Gray in a state of confusion about his identity. Initially, his moral compass further confused him in his role, which, coupled with Carmen’s role in the ordeal as well, only further drove him down the path of discovering his former memories. He became somewhat frantic about this, hoping for answers in his self-identity crisis, which then combined itself with his desperate desire to recover his lost memories. His reality then shattered as more questions arose about his past life. He was brought in by Professor Maelstrom, who informed him of his last profession. It was shown that during Gray’s “interview” for V.I.L.E., he was quite arrogant about his skills as a thief and disrespectful to his job as a technician, along with showing a small distaste of opera. By watching this, Gray finally realized his role in V.I.L.E. and his connection to Carmen, which then left Gray in a state of slight shock and came to an ultimatum (both literally and metaphorically): to return to his normal life with no strings attached (even though V.I.L.E. lied about that part) or rejoin V.I.L.E. and “redeem” himself. When confronted by Carmen, Gray, seeing his former life, ultimately chose to return to V.I.L.E., believing it was his role in life, but, just like back in Poitiers, once again tried to get Carmen to rejoin V.I.L.E., ultimately proving his care for Carmen had not diminished and truly wanted to return to the way things were.

After his return to V.I.L.E., Gray quickly readjusted to his role, maintaining his demeanor as a somewhat cocky but overall loyal brother-figure in the friend-oriented team. He was also shown to enjoy his first heist with a brainwashed Carmen on their side, but his merciless and loyal dedication to V.I.L.E. side shone through after he contemplated taking out Devineaux with his Crackle Rod, which could’ve severely injured if not killed Devineaux altogether, but was forced to call this off after Carmen went off the grid to steal a priceless violin. However, after a few months of pulling heists, Gray became reluctant in allowing the Faculty to continue their ruse on Carmen, beginning to show remorse and concern for his friend after she became more ruthless, slowly realizing the immense effect V.I.L.E. had on her. Ultimately, Gray decided to help Carmen regain her memories, admitting that while it was fun while it lasted to have Carmen back in V.I.L.E., he could no longer stand knowing that her choice in her profession was not by actual choice, fully proving that he cared more about Carmen and her best interests than his loyalty to V.I.L.E. This decision allowed him to semi-reform by secretly conspiring with A.C.M.E. to return Carmen’s memories and abandoning his teammates to assist Carmen. In the end, despite being severely wounded by a brainwashed Carmen due to his efforts in saving her, he survived the ordeal and the plan to help Carmen proved successful. After awaking in a hospital bed, he immediately began to worry about Carmen, but was settled after being informed by Chief. He is finally seen in his hospital bed, content with knowing Carmen’s safety was ensured. He seemed to show some form of remorse for his former life, although whether or not it may have something to do with a renewed moral compass or because of his and Carmen’s recent events is unknown. Although it is unknown if he will return to being a small-time thief (now that V.I.L.E. is in ruins) or finally become an ordinary man again, he seems to be content knowing he at least assisted Carmen on her side this time, which shows he cares immensely for the people he befriends.

"What about you, kiddo? What's your story?"

Getting stood up by Carmen

Gray and the Cleaners

Waking up after falling

"You sure you don't remember me?"

Gray outside of the opera house 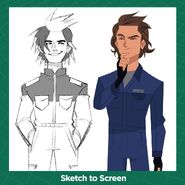