Princess (by The Mechanic)

Countess Cleo is a faculty member of V.I.L.E Academy.

She is also a criminal mastermind who teaches students at V.I.L.E. Academy, her classes place a great amount of emphasis on undercover work and the need to be both cultured and calm under pressure, as well as distinguishing between real works of art and forgeries.

Countess Cleo has a superior attitude of herself, unwilling to dirty her hands, and sophistication as a useful tool for manipulation of others in lower classes.

In terms of participation, she mostly keeps to herself during faculty meetings, rarely speaking to the others in favor of letting them discuss the matters with each other.

There appears to be a small rivalry between Countess Cleo and Professor Maelstrom as shown in, "The Fishy Doubloon Caper." Maelstrom mentions wanting to melt down the doubloon for new cufflinks in order to make the Countess envious. This suggests that the Countess desires to be the first to have anything remotely fashionable and is easily envious of others for that reason.

There is the suggestion of a mild crush on The Duke of Vermeer (Zack) as she mentions how relieved she is that the "charming" Duke was not the culprit of the theft at the Vermeer auction like she had thought he was. This also indicated that Cleo was rather naive, as she was auctioning the paintings to the criminal underworld and should have been suspicious of any one of her guests.

Cleo is also a very serious woman and very fond of herself. By the time of Carmen's Enrollment, Cleo stated she was not very thrilled due to Black Sheep's lack of manners in class. She is clearly not fond of children, as shown when she was hesitant on allowing a baby Black Sheep to live on V.I.L.E. Isle and her reluctance on Black Sheep's enrollment.

In The Egyptian Decryption Caper, Cleo also showed herself to be rather short-tempered and impatient. This was directed primarily towards Julia, as she was a prisoner and one who Cleo threatened the moment the detective showed any resistance.

According to the tie-in novel, Who in the World is Carmen Sandiego?, Countess Cleo is Egyptian. It was later stated in the episode The Fashionista Caper that Cleo was previously a failed runway model until she turned to a life of crime, eventually working her way up to the top to join V.I.L.E. Faculty.

Years ago, she, along with her fellow Faculty members, dispatched a young Shadowsan to spy on and assassinate (if necessary) Dexter Wolfe, their fellow faculty member, after discovering him going off the grid longer than normal and moving V.I.L.E. assets into personal Swiss bank accounts. Shadowsan, however, failed in his mission, due to Interpol interference and a young agent shooting Wolfe dead, and instead brought back Wolfe's baby daughter (who would later grow up to be Black Sheep/Carmen Sandiego) back to the Isle. Cleo was very reluctant towards letting a baby live there, and was quite disgusted at the idea of raising her, mainly due to how she values refinement and the fact that babies are rather messy. However, she agreed after the child showed potential in thievery. She and her associates then awarded Wolfe's vacant seat to Shadowsan in return for his deed.

Having been one of the five members of V.I.L.E. Academy who contributed to Black Sheep's upbringing, she was one of the four members who supported her admission to V.I.L.E. Academy. Initially, she had opposed Black Sheep joining, stating that she would not want Black Sheep's unruly nature to disrupt her class, but Malestrom argued that she could benefit from supervised training, and Cleo voted to allow her to enroll.

During the hard-drive incident, Cleo voiced that Black Sheep must be punished. Since Carmen left the island, Cleo has been collecting 33 of the 34 paintings of Vermeer; the only one she hadn't stolen was the 'Woman in Blue Reading a Letter'.

Carmen stole the painting herself in order to steal the remaining paintings back. Cleo extended an invitation to her dinner party to Zack, who was thought to be the Duke, an accomplice of the mysterious Duchess, the thief who stole the last painting, who, in reality, was Carmen.

Upon arriving at Cleo's Chateau, Zack was greeted by the Countess who escorted him to the banquet hall. Cleo welcomed the various criminal overlords who would bid on the stolen paintings.

Before dessert could be served, agent Devineaux barged in and stated that there was a female thief in the building. This worried Cleo, before the clumsy agent revealed that he was talking about Carmen Sandiego.

Now knowing that Carmen had been there, Cleo cancelled dessert and went to check the painting, only to find that they were all gone.

After Carmen stole back the 34 paintings, Cleo told the Cleaners to "scrub" the manor.

When the V.I.L.E Faculty were discussing the connection between Carmen Sandiego and Inspector Devineaux, Cleo pointed out that Devineaux invaded her Swiss chateau during her pre-art auction dinner party, giving Carmen the time she needed to steal back the stolen paintings. The Countess then voiced regret over suspecting "The Charming Duke" of being Carmen's inside man.

Cleo was surprised that Shadowsan agreed to go deal with Devineaux himself and was later seen outside to see him and Coach Brunt off.

As one of the five masterminds of V.I.L.E, Countess Cleo has near supreme authority over the organization.

Cleo is a master of identifying real valuables from worthless forgeries.

Cleo argues with Saira over who Carmen will steal for next. 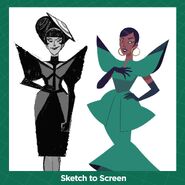