Carmen Isabella Sandiego is the main character of the eponymous edutainment franchise originally created by software developer Brøderbund. Throughout most of the franchise, she is a master thief and is the founder and leader of the Villainous International League of Evil (code-named V.I.L.E.). However, the 2019 reboot features a new V.I.L.E. that took in a young Carmen Sandiego and trained her to be a thief. In all incarnations, she is relentlessly chased by the ACME Detective Agency.

There are many discrepancies in the various media depicting Carmen Sandiego, and no official or correct canon has been designated or established. However, the following seems to have remained consistent throughout all Carmen Sandiego media created since around the mid-1980s:

In most Carmen Sandiego media, it is stated or implied that Carmen is a lady thief that steals only for the challenge of it, while some of her V.I.L.E. minions are more traditionally motivated. She often describes her schemes and the heroes' attempts to stop them as being a game, regularly gloating that she will never be captured, that her plans are infallible, and acting as though any efforts made against her are trivial. Sometimes, she asserts that it is impossible to understand her motives and seems to revel at how difficult she makes it for anyone trying to figure her out.

Other portrayals, however, show the character more than willing to bring chaos and destruction on the world. For example, many of the thefts committed in the Where in Time Is Carmen Sandiego? game show, like stealing the history of medicine, for example, would clearly cause millions of deaths, though is never specifically stated. Also, in Word Detective and Math Detective, she appears to be particularly fiendish, plotting to steal the concept of natural language to achieve world illiteracy in the former, and using a machine to shrink monuments to the size of gems and to make V.I.L.E. headquarters impenetrable in the latter. This inconsistency in her portrayal is never explained, but it's reasonable to assume that not all Carmen media is set in the same universe.

In the early games, not much is known about Carmen's background. She is said to have been a former spy for the Intelligence Service of Monaco.[1]

Carmen's backstory was changed and expanded in Time where it was revealed that Carmen used to be an agent at the ACME Detective Agency.[2] At the age of 10, Carmen won a large sum of money on a game show, which she used to travel the world. By age 20, she had been recruited by ACME and partnered with Julia Argent.[3] However, Carmen quickly tired of the ease at which she could catch thieves. She decided to leave ACME and became a master criminal for the thrill of the chase.[4]

Over the course of the series, Earth changed the details of her childhood. This version of Carmen was raised at the Golden Gate Girls' School in San Francisco, California, USA. The Chief took in a young Carmen and made a home for her at ACME. She quickly became the greatest detective the agency had ever seen under the guidance of Suhara. One of her greatest accomplishments was successfully capturing Gunnar Maelstrom at age 17. Her reasons for leaving ACME are unknown, but she often steals valuable treasures simply for the thrill of the chase. She views thievery as a mind game, not a gateway to riches, and thus, this incarnation of Carmen isn't truly evil, as whenever ACME agents are in actual peril, she will drop everything to save them, then chew out her goons.[5]

The Babble-On Machine and the Quantum Crystallizing Machine

An alternate incarnation of Carmen is presented in both Word Detective and Math Detective. This version is much more ruthless and unforgiving. She plots to steal the ability of natural communication[6] and historical landmarks by shrinking them.[7] To do the former, she kidnaps as many ACME agents as she can and hooks them up to a huge machine. No explanation is given for this dark turn of events.

The 2019 revival re-imagines Carmen as a heroic protagonist.[8] In this timeline, Carmen was found as a small girl in Buenos Aires, Argentina with nothing but a set of Matryoshka dolls. Taken in by a V.I.L.E. faculty member, she is raised on the Isle of V.I.L.E. and eventually trained to be a master thief, under the code name "Black Sheep." However, she struggles to maintain the level of maturity expected of her.[9] After discovering that V.I.L.E. trains thieves to steal at any cost, she leaves the organization and sets out to take it down. After becoming a renowned international criminal, she is pursued by Interpol, ACME agents, and even by V.I.L.E. itself.[10] 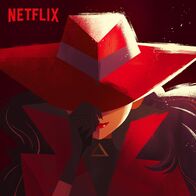 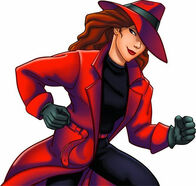 DefunctTV- The History of Where in the World is Carmen Sandiego?

Carmen has appeared in every entry in the franchise so far. Most storylines prior to the 2019 series involve tracking her down and attempting to catch her.